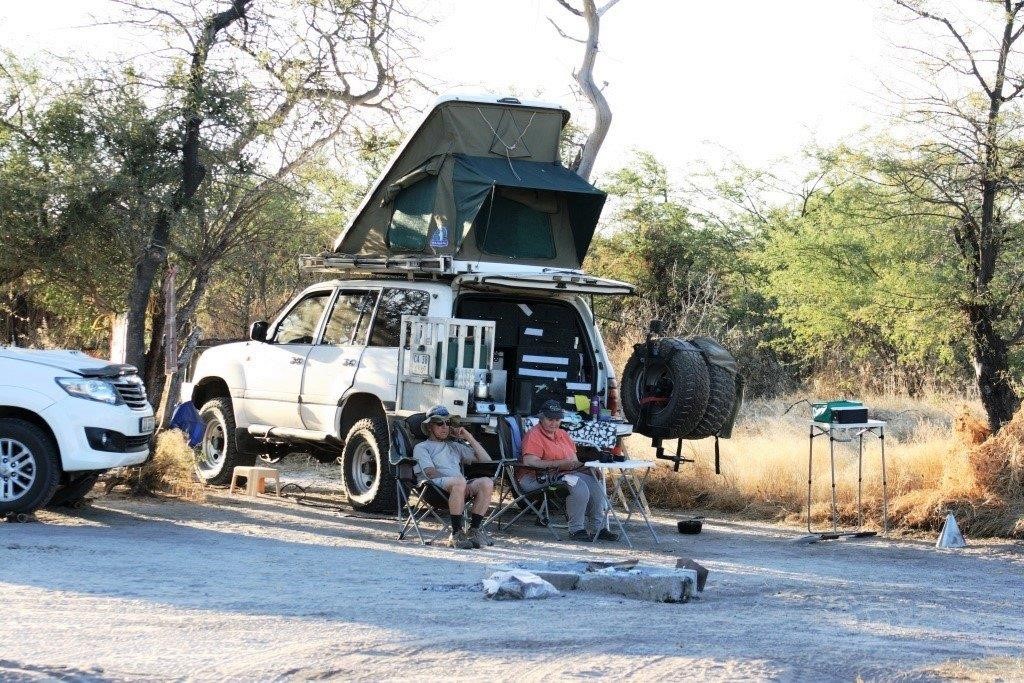 Our group included a super list of experienced overlanders, Dave & Anne Roy, Corne` & Erika Smal, John & Lana Zulch, and a new member Susan Skog with her friend Dalene Stickling. John & Lana set off from Windhoek, with the rest of us due to meet up at Riverside near Kimberley, after having Covid tests the previous day, with 72 hrs to cross the border. Unfortunately, Dalene tested positive in Douglas, which meant that she and Susan had to isolate on a farm nearby Douglas and could not join up.

Our border crossing at Ramatlabama included a rapid test, and thankfully all went well, and after a night at Phuduhudu game farm near Lobatse, we travelled to meet up with John & Lana at Limpopo River Lodge camp for a 3-night stay. This is on the shady bank of the river with noisy hippos, crocs and monkeys as local residents. Game drives were on hand, as were hot showers and restful campfire braais. Before departing on our last morning, we went on a drive in the Concession to Phiri Pan, where a large elephant family were romping.

We then travelled about 30 km North to the exclusive Molema camp in the Tuli Wilderness Concession, where no private vehicles can be used.

Features of this great 2-night stay: Dave`s night camera revealed visiting lion in camp both nights, with spoor in both areas. Next day we had a 6:30am departure with Jerry, our guide and driver of our game-viewer, who has been there since 1987. After a game drive he took us for a hike up a rocky climb to see an eagle’s nest, with 2 eggs being watched by an anxious parent.

A call on the radio then advised Jerry that there were lions in our camp, which hastened our return to join Anne & Mary, who were left there to relax!  On arrival we found that the pack had moved through the Limpopo riverbed to RSA, so we ventured into the sand for camera action, keenly observed by the lion.

At 5pm Jerry collected us for a dinner in the bush, but first we stopped at a hyena`s den on a koppie. We quietly climbed up the rocky path and sat whilst Jerry called the inhabitants. A 3-month-old juvenile came out and sat around for probably 30 minutes, his parents being out hunting. Fascinating to sit with a creature lying 5 metres away watching us!

The dinner in a clearing surrounded by packet candles, which handsomely concluded a special stay. Butternut soup, delicious beef stew and milk tart, with our own liquid refreshment. TOP RATE!

We had booked a transit stop at Tuuthebe Lodge Camp en route to CKNP. There we enjoyed a group dinner, and next morning were amazed to find Susan & Dalene there ready to go, having been tested negative and caught up just in time for the 2nd half of the trip.

Central Kalahari: First of 5 nights was at Sunday Pan, and we were grateful for the Samel carrying all the firewood. At the campfire we listened to the story of the positive test, isolation, and subsequent catching up days later by the two adventurous ladies.

Then on to Passarge Valley for 3 nights, where lion roars woke us up early. Sightings of lion and cheetah kept reminding us of our last visit to Passarge 2, where our club camp was raided by lions. John Fincham will remember this place. Cheetah, lion and bat-eared foxes were of main interest for this camp, with smaller creatures and birds ever-present.

Susan & Dalene departed 1 day early, as they were hearing CV joints rattling, and wished to have repairs before joining another group. When we arrived at Motopi camp for our final night they had already left, and eventually reached Chobe with another group. We all headed for Ghanzi, where our expensive Covid test took place [P1200 each]. With John & Lana due to aim back into Namibia, they stayed over to await their Covid border clearance, and the other 3 couples left separately, heading for the Lobatse clearance facility.

People always ask: “is it safe to travel over the border?” A couple of hours back in RSA, passing through Vryburg masked robbers tried to wrench our Cruiser doors open in the centre of town………… fortunately unsuccessfully.  We reached Cape Town on Botswana fuel @ R5.00/LT below RSA prices after sleeping over in Kuruman.

Thank you to the great participants for your positive attitude to group overlanding! Everyone pulled their weight and tackled the daily issues without complaint. A real pleasure.