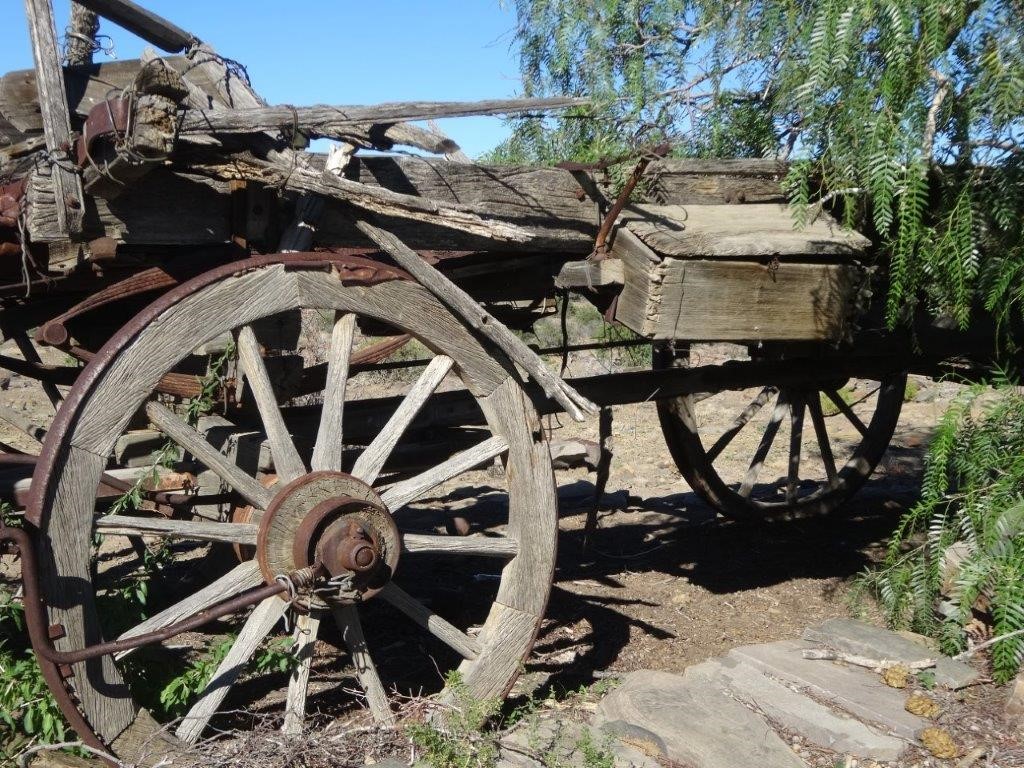 We continued our drive in the direction of Sutherland, then turned off the tar and into the farmlands and the mysterious Moodenaarskaroo. (the name has given rise to many legends – see footnote below). Happiness for us all to be away from the impatient traffic, and on the ‘stofpad’ to our destination farm.

This farm road meanders under the foothills of the Klein Roggeveld mountains, passing through a number of sheep farms that are now having huge wind generators erected on their land. With climate change a very real threat to farming, revenue from the leasing of the land to the wind-energy companies is no doubt a welcome new income stream for these farmers.

We arrived early afternoon at Kareedoringkraal gate, only to find that our campsite was in fact on the adjacent Spitzkop farm, a few kilometres further down the same road. We were given a warm welcome there by farmer Brink and his wife when we arrived. They shared interesting information with us about their farming practices, and their attempt to combine farming the land successfully, while respecting the ecology of the land. They have associated the farm with Cape Nature, that imposes guidelines on how the land must be managed.

The farmer took us to the camp, only a short distance from the farmhouse. This large camp is situated on a river course under indigenous Karee and Vachellia (acacia) trees, with a huge illuminated cross watching over the camp from the koppie above. There are numerous toilets and showers around a huge Kareeboom, and hot water provided by a very efficient ‘donkey’ geyser. Our arrival in camp was also greeted by two small ginger cats             (f-off 1 & f-off 2) that we all thought cute at the time, but their cuteness disappeared once they had stolen any unguarded food, and raided our trash!

We set about choosing sites and pitching camp. There were many sites to choose from, but one site was coveted by two members. Eventually the club’s seniority rule (?-Ken’s?) was applied, together with some dodgy ‘diplomacy’ (Shona’s), and the errant upstart (Rob) was sent packing! A nice fellow camper (Gisela) took pity on the bruised upstart, and peace was restored.

Our first evening was in mild weather around the fire, and quite special. The banter never stopped, from lost campsites earlier in the day, to the more serious matter of braaing. We all enjoyed the fun under a moonless sky, with stars that reached all the way down to the horizon.

On Saturday morning five vehicles with a motorcycle following, set off to drive the trails on the farm. A short distance into the trail the track suddenly started to climb and we encountered a steep section with both a rocky and loose surface, as well as a off-camber. Andy cleared the climb safely, and Ken followed gallantly, but it seems he must have chosen the wrong line. The vehicle bounced fishtailed, and then tipped dangerously to the outside of the trail. We all held our breaths as the vehicle teetered on the edge, but thankfully it landed back on its inside wheels. The other drivers took their turns at the obstacle, and with expert guidance, thankfully managed to clear the obstacle with no further incidents. The trail continued deep into the mountains with a mixture of steep ascents descents and river course sections, and always the stunning views over the Moodenaarskaroo. We returned back to camp early afternoon, where everyone chilled for the rest of the day.

That evening farmer Neil Brink and his wife Marietjie (we are on first name terms now!) joined us at the club fire. He again spoke passionately about his farms, and showed us phone videos of the swollen rivers running through their farm in February this year. Incredible to see the amount of water in these normally dry river courses, and that within two hours the water had all passed through the farms, and river beds were sand and rock again.

On Sunday morning we went looking unsuccessfully for the farms elusive black eagles, that we were told nest on the cliff a short distance from the farmhouse. We then set off and spent the day driving the remainder of the trails on the farm, as well as travelling some distance to an interesting steep road leading up a mountain to a mast. We were rewarded with more stunning views of the Moodenaarskaroo, and the Swartberg Mountain range in the distance. We traveled back towards camp late in the afternoon, and en route found the eagles nest on the cliff, but had no sightings of the birds. We headed back to camp, looking forward to another evening together around the campfire.

Monday arrived, and Trevor and Ronel, and Gisela left camp early for home. After saying our goodbyes to Neil and Marietjie, we drove across to their adjacent farm, to have a look at the Kareedoringkraal guesthouse. It is a very old farmhouse that Marietjie has renovated nicely, in keeping with the era of the property.

We departed from that farm to Laingsburg, and within ten kilometres Ken notified us he was losing pressure on the one rear tyre. Sure enough a puncture, but worse was his spare wheel mechanism was jammed, and the spare wheel couldn’t be dropped down from under the truck! Fortunately Ken had another, albeit leaky as well, wheel on his roof-rack that was fitted to the axle and pumped up. The tyre deflated slowly, but they managed to limp into Laingsburg, and have both tyres repaired.

It is always a privilege to spend time with like-minded people in the outdoors, and to be able to visit a farm like Spitzkop. We all know to make it happen Andy spends many hours on researching and planning such a trip. So thanks Andy, and to Colleen as well for all your work behind the scenes. We are all looking forward to visiting more such destinations with you guys when you get back from your Namibian adventure. Enjoy that trip, and please take care.

Footnote:  Moodenaarskaroo: There are many theories regarding the origin of the unfortunate name for this region.

One theory is that a group of murderers broke out of the Worcester jail and hid in the area for many years, evadIng their pursuers and recapture.

Then there is the grim story about the policeman called Van der Colf, who patrolled a vast area on horseback looking for stock thieves. Apparently he would fasten his unfortunate captives to his horse and make them walk all the way to jail tied behind the horse.

In his book Timeless Karoo, Jonathan Deal writes: ‘When Van der Colf became bored and perhaps a little drunk, he would release and allow his prisoners to run away and up a hill. He then took potshots at them with his rifle, often with deadly consequences’

Deal also describes another series of violent events that could have given the Moodenaarskaroo its name. ‘In the 1770’s there was a farm foreman who lived next to the Sak River, who shot Bushmen indiscriminately. When the Bushmen retaliated and murdered the foreman, a commando was sent from the Cape to punish them. Many innocent Bushmen died in the revenge attack’.

‘After the commando returned home, Bushmen across the Great Karoo retaliated and started to plunder farms and murder farmers. Another punitive commando was sent out, and many more Bushmen perished.’

A less dramatic conclusion could be that the name was derived from the murderous nature of the climate, which alternates between extreme heat and desperate cold?