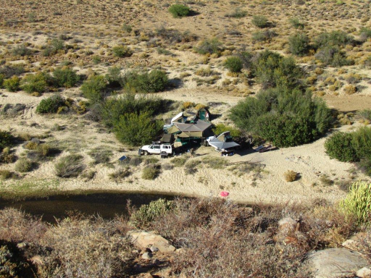 A late decision Doring river trip ended up being a really good idea. At the Christmas party we chatted about this trip to the Doring river, and Trevor and Ronel were immediately in agreement to join. A short while later we got Ken and Shona on board, and I thought this will be it for a date this close to Christmas. Well, I checked my SPAM folder just in case, and low and behold, there was an email from Saul and Beverley who were going to join us for part of the duration.

We agreed to meet early in Ceres to be able to get to camp early to set up….but this did not happen as planned.

We set off from Ceres via the Gydo pass and then via the Katbakkies pass to meet up with the R355. We stopped along the way to have a bite to eat, stretch legs and deflate tires.

I had loaded a route on the GPS, which I thought would be a little longer in distance, but shorter in time which we then followed. It took us through farmland and past some dry pans and through some valleys until we got on to the actual track down to the riverbed. When we crested the pass, I was a little worried about the water level in the river, as it looked as if there were only a few pools left. As we got further down with better views, we could see that the pools upstream were still rather large and when we got to the crossing, we could see that the river was actually still flowing.

We had agreed to collect firewood before setting up camp, and got straight to it. I had this one tree in my aim for the past couple of times that we were there, so we jumped into action with snatch rope and a decent runup to get decent branches off the tree. Everybody was sweating heavily as we were operating in 42-degree heat. We took as much wood as we anticipated we would need for the following nights as the heat was really hectic to gather more. An attempt was made to put up camp, but anything that was metal was too hot to touch. We got up our awnings and headed to the water to cool down, and was that necessary at that point. As the day cooled down, we got our tents set up and settled down for a nice braai, visiting the river as often as possible to keep cool.

The next day some of us went for an early walk up the river, as the sand got so hot later in the day that it would burn the feet of the dogs. The river was still rather full, but with big sandbanks which looked rather inviting to set up camp. Ken and Shona went for a walk to the running man, and Trevor and Ronel stayed behind at camp to chill in the water and to look after the older dogs.

We added tarpaulins and shade cloth to the awning of the Landy to accommodate all of us during the hot part of the day…which was most day. We sat and chatted, swam and had a few refreshing beverages to then end the day with a lovely braai. The wind was picking up which restricted us from making fires which could get out of control, but we had fantastic coals to braai on from the very hard wood we had collected.

The Friday it was time for Saul and Beverly to depart, even though we did our utmost to convince them to stay on. We needed to trim some bushes and off they went, crossing the river without any incident and then the last we heard on the VHF when they were safely out the rocky section and on their way to Cape Town.

Saturday morning, we climbed up to go look at the Rock structures. It looked as if more construction is taking place on more structures, which was confirmed when we got to the top. Thank goodness there was a slight breeze which cooled things down while hiking. During lunch time the heat kept climbing and we ended measuring up to 43 Degrees in the shade. After swimming and eating, we ended chilling or having a snooze in roof top tents to again get together in the day to chat and snack under the awning.

The day stayed hot late into the day, and we chased any shade we could find, swimming every couple of minutes to cool ourselves down. We ended up with another lovely braai and chats to retire into our tents for the night. The wind blew every night which was cooling things down nicely, but it also restricted us from making the fire too big.

Sunday morning, we started early to pack up to avoid doing so during the intense heat, and got away at 8h00. The drive out of the river went without any incident and we had the long boring R355 ahead of us. Just before departure, we did a cleanup of the camping site and decided to take the trash which someone else had left. Well, this trash was a full bottle of wine with a note attached. As most can remember, there was a Frying pan and fire wood left at the site before. I made contact with the people who left the wine bottle and was told that the pan and the firewood was actually left behind with a note too. The pan was left to the next person to get together and make food. The wine was left, for the next person to also meet up. Unfortunately, we did not leave anything behind with a note for the next persons.

Even though it was hot and windy, we all agreed that these few days were enjoyed by all, and we all had the feeling that we could have stayed a few days more.