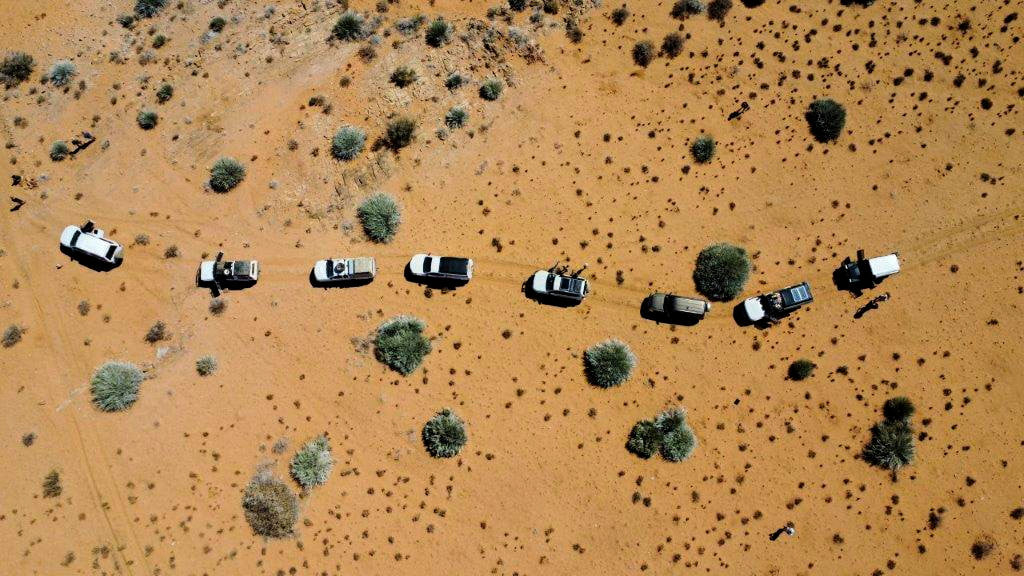 Our adventure started in Van Rhynsdorp where we met the rest of the team. Mostly strangers, they all became like family by the end of the trip. Our expert leaders, Andy and Colleen had planned an exceptional trip. Andy, the Google Earth fundi, found tracks that were very less travelled and our adventure began. From Van Rhynsdorp we travelled to Garies where we met our intrepid guides Norman and Bob. With our guides we travelled into the Namaqua community area and to the top of the Kamiesberg – our highest point at Leliefontein. Norman, an expert on the area, had a wealth of knowledge on the history and politics of the area and showed us the beautiful side of patches of stunning flowers that were still in bloom in the higher areas and the more dismal side of barren areas due to overgrazing.

With Bob, an amateur botanist, together with Shona and her wealth of plant books and Simon’s horticultural expertise, many of the plants were identified. I found a new interest and respect for the hardy flora of the area. I realised that when you actually take time to look there is so much to see. We spent 3 nights in the Kamiesberg camping in dry river beds, a first for us but magic to see the stars at night and magnificent moon rise. On the 3rd day we said our goodbyes to Norman and Bob in a Kokerboom forest- literally so many kokerboom trees. We left Norman with his cup of tea and Bob practising his art drawing the scenery and headed off to camp in another river bed. The 4th night we spent at Nigramoep on a high-lying sandstone plateau. Beautiful views and a very gusty wind but after a hot shower and a home cooked meal the wind didn’t seem so bad.

We headed off at 9ish, stopped in at a memorial to the Van Wyk family original homestead and then over the Ou Meul Pass. Views like you could see forever including a dust storm building in the valley. We crossed over the Port Nolloth Road and into the Richtersveld. A long rocky climb to our first campsite, temperatures reached 34 but a cool breeze was most welcome. The plan to spend an extra day there lost out in favour of heading to the river. A bumpy ride which seemed to be a constant uphill got us to Steinkopf for a refuel and some last minute supplies. We lunched at an abandoned, probably copper, mine and headed down to the Orange River, temp reaching 38. Stephanie’s birthday was celebrated in style on the 23rd with sparklers and chocolate cake. I don’t know how Debbie and Steve managed to carry the cake all the way, it was a wonderful surprise and a welcome treat to celebrate the birthday girl. We spent 4 nights camping at a site where the swimming was good, a welcome relief from the soaring temperatures. Floating down the river on pool noodles were great fun, thanks Steph and Ian for carrying them all the way. We said goodbye to Dave and Joyce who had to get back to town and to Steve and Debbie due to a nagging injury Steve had picked up along the way.

We spent a total of 8 nights at various points along the river, each so different and special in their own way. The final 2 nights were spent at Kum Falls, our host Kalinka and her son Ben gave us some memorable moments for sure. Kalinka described some of the terrible hardships she had been through and was still suffering. Life in the Richtersveld is harsh and only the most resilient can survive. On top of it all she had lost her goat and we were asked to look out for it. Unfortunately, she had been unable to contact us to advise that she was holding a spiritual ceremony from Friday sunset to Saturday sunset and no uncircumcised men were allowed in the area during this time! This did evoke a nervous giggle from the team and she was quick to reprimand us to be very serious. She threatened to check the “status” of each man and by her tone we could see that she really meant it. That really got the guys worried!! The site was extraordinary. Multiple falls flowed over enormous rocks and had carved out huge potholes. There was evidence of leopard and baboons in the tracks noted in the sand but we did not see them. We enjoyed a swim in the calmer area accompanied by jumping fish. Ian managed to catch a yellow fish but it managed to escape, the hook catching Ian in the hand.

Due to the wind (or the threat of circumcision) we decided to leave on Friday morning. Happily Mandy found the goat and it was safely returned home, hopefully some good fortune for Kalinka.

We headed off to Klein Pella, an oasis of date palms – and elected to stay in the campsite, refill dwindling water supplies, enjoy a hot shower and the best date balls ever!!

Our final night we headed to the Buffels River valley to find a campsite. We drove through red sand dunes which made the landscape stunning with colour. Lunched at the Van Der Stel copper mine, an impressive hole dug into the mountain lined with blue green rock. A quick stop in Springbok for cappuccinos – thanks Laurence and Mandy. Camping in the Buffels river valley proved to be very cold with temperatures plummeting to -3 in the night. We packed up for our final time and left camp at 8ish to head for home.

The trip was not without some animal encounters. Along the way a few wild animals were spotted including a majestic Marshall eagle who perched on a telegraph pole and posed long enough for all of us to get a view and some great pics. A jackal ran alongside of us for some distance and a group of Kudu made a wild dash over the road right in front of Ken and Shona’s car, easily clearing the fences on either side of the road. Steph found scorpions at night with her ultraviolet torch – a good motivation to keep shoes off the ground

There were also some not so wild animals including a herd of goats which came daily into our river campsite to graze on the grassy patches and a couple of guy ropes and solar panels! One friendly kid adopted us and spent the night under Ken and Shona’s car. Fortunately, they did not hear a thing but I am sure his bleating kept some campers awake. Who knew goats had such personalities!

An overland trip is never without some extraordinary memorable moments and ours had its fair share. While the interaction with Kalinka may be the most memorable for some there were certainly some other hair raising moments.

Accessing the first river camp it was decided to take a route through a short muddy patch. On walking over the mud it appeared to be quite firm but when Andy tested it, his tyres sank quickly into the sticky mire. I saw a snatch strap in action for the first time – dramatic but effective and after a few tries the vehicle was released from the muddy grip.

We had to drive through the sand storm that we had spotted from Ou Meul Pass. The road in front of it was a tartan pattern of red and white sand but just further on we were enveloped in a blanket of swirling red sand. Visibility was nil and keeping the vehicle at speed to avoid sinking into the sand was challenging to say the least.

Many of the trails were challenging but a race up a sandy slope to get to the top of a hill proved to be a bit much for some. For us it was a long reverse down from 2/3 of the way up and we took the scenic route to meet the conquerors at the other side. Accessing another river campsite a rocky road had to be rebuilt before we could slowly make our way down its treacherous slope but all made it without incident.

I looked forward to the nightly bonfires. I had heard about Andy’s legendary bonfires and they didn’t disappoint. Some very different meals were cooked on that fire including nachos and pizza – who knew you could do that on a braai!

I think the vehicles came home heavier than they left thanks to a bit of a scratch patch craze. Some crystal treasures were discovered – not the diamond I was looking for unfortunately but we collected some beautiful coloured stones nevertheless!

The most memorable for me will be the awesome people we did this adventure with. Friends who were willing to help each other out. Whoever had extra didn’t hesitate to help out a fellow traveller. A big thank you to Andy and Colleen, our intrepid leaders who showed us some of the most beautiful areas on roads less travelled and made sure we were all together and safe.

This trip report was kindly compiled by Louise Roux.