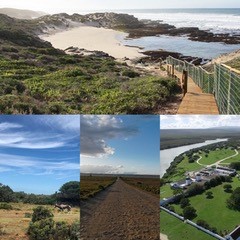 We arrived to a windy camp site with Gilbert already set up and ready to start the fire.

Our campsite was situated among the trees and Friday evening was spent around the fire.

After breakfast on the Sat half the group took off on their  mountain bikes traveling among the open fields and MB trails towards the sea. En route we saw ostriches, bontebok, baboons and some of the 240 bird species in the reserve.

When we reached the lookout point at the beach, whales were spotted. Along the beach area beautiful houses were seen that can be rented out per day or longer weekends. The total route was about 27km by MB.

On return some had delicious chocolate cake and coffee at the restaurant with a beautiful outside pool area.

Gilbert and Walter took a ride around the nature reserve the Saturday morning and joined the MB group at the beach.

The afternoon was spent at leisure with Walter going on one of the hiking routes around the lake area. Another pleasant braai followed under the full moon.

On Sunday morning after breakfast, the group separated with some traveling via Bredasdorp for a breakfast stop at the Wimpy.