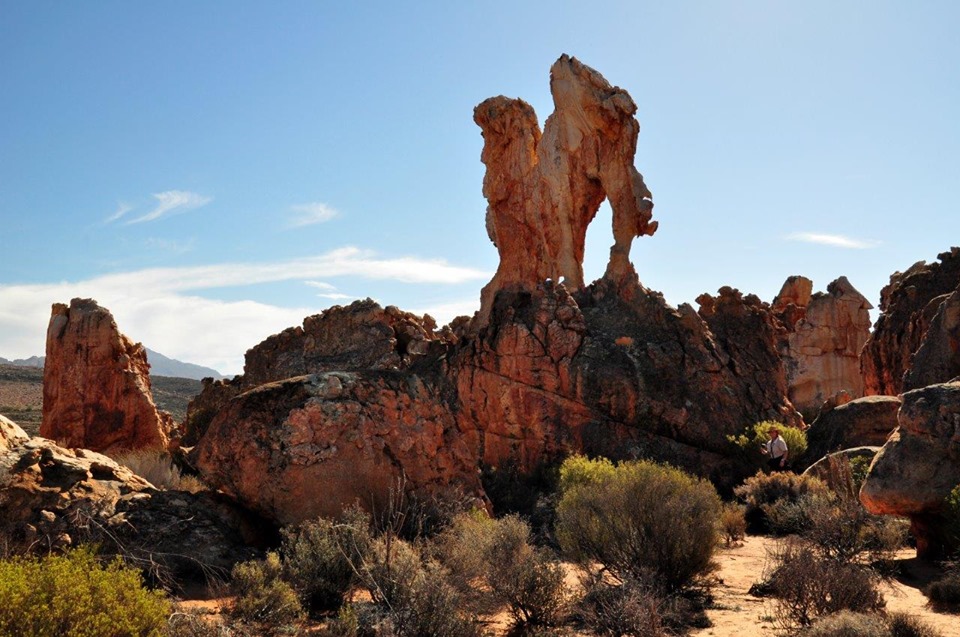 Zoo Ridge is one of the least known but most spectacular areas for rock formations in the Southern Cederberg. It is on privately owned land and is called Zoo Ridge as ones imagination is the only limitation to the number of animals one can see in the rock formations. The rock formations cover a huge area and would take many days to explore but one has to start somewhere!

What do you get when you put an eclectic bunch of members together in an old farm house in a quiet area of the southern Cederberg? The answer is a weekend of exploring, fireside chats and friendship. In other words all the best values of the 4X4 Offroad Adventure Club rolled into a memorable outing.
“Zoo Ridge”, is the name given to a site on a farm close to the edge of nowhere – a comfortable two and a half hours drive north-east of Cape Town. Travel down the N1, turn left to Ceres, go through Prince Alfred Hamlet, pass Witzenberg Valley and then another 34 kilometres, of which the last 17 are on dirt. It is not exactly nowhere but it is on the edge of the productive farms and
very quiet! Only the sounds of goats, some baboons in the hills and birds broke the silence.

The farmer and his wife were very welcoming handing over a massive loaf of bread which was still not finished by the end of the weekend.

Eclectic described the farm house as well. Built a long time ago it has been added onto several times resulting in a number of bedrooms, bathrooms, a lounge, dining room and a kitchen. There were more than enough beds once some members decided to camp. Outside was a large veranda where we gathered and an enclosed boma under a massive oak tree.

Friday night saw the first braai in the boma with a huge fire courtesy of a massive log which Andy found … and some pallets. Members got to know each other; some older members meeting the newbies and the all of us meeting a delightful Nate (3).

Saturday was the day for exploring. We left in a convoy of 9 vehicles – also eclectic with a concentration of Fords – and drove a few kilometres to the site of Zoo Ridge. Wisely Andy had chosen to leave this to view on the way back as it was the piece de resistance and required time. We looked at the arches and the sculptured rock formations and moved on.

This part of the Cederberg consists of scattered rock outcrops interspersed with Cape fynbos. An ideal sanctuary for earlier nomads, there are San  paintings on the rocks depicting animals, however most of these are weathering and will be lost in a few more years. We searched for an elephant on a prominent rock on the way in but only a few members thought they could make it out.

The rocks themselves have been carved into arches, overhangs and caves by the weathering process. Twisted and gnarled they lie amid the flora which – despite being in pristine condition – seemed to support very little bird and animal life. The farmer who owns the land does not appear to use it and is
protective of the environment restricting numbers and type of use. Nate climbed to the top of one of the rocks supported, where necessary, by Andrew.

We moved on, stopping at another of the outcrops before driving to a canyon. Despite the lack of rain there was water flowing at the bottom. The last stop was also the highest, towering a hundred metres above us. After tea and a chat we turned back to retrace the route to Zoo Ridge.

I don’t know why it is called Zoo Ridge. The ridge is clearly visible as a line of sentinel rocks which one has to walk a kilometre to. “Zoo” may refer to the animals painted on the rocks but few members saw them. (The “Zoo” is that one’s imagination is the only limitation as to how many animals one sees in the crazy rock formations. Andy.) Most members were content to walk to the site, which stretched several kilometres and back. Andy and Colleen did some
serious exploring, including a part of the canyon and Steve and Debbie stayed late to take some photos in the afternoon light.

The rest of the members returned to the camp where Andrew collected acorns for his pet pig and Walter, Dave and Reg washed the aphid goo which had been sprayed onto their cars from the overhanging oak trees. Saturday night was another braai and another fire of note – three massive logs and some pallets.

Sunday morning we gathered around the fire which Ivan had coaxed back to life and while drinking early morning coffee we burned the remaining pallets. On the return trip most of the members stopped at King Solomon’s Temple, another rock formation site.

The weekend brought together the best of the club: the members, some exploring, comradeship in a pristine environment and a break from our busy lives. Thanks to Andy and Colleen for planning and organising the trip and to the members for making it a memorable weekend.