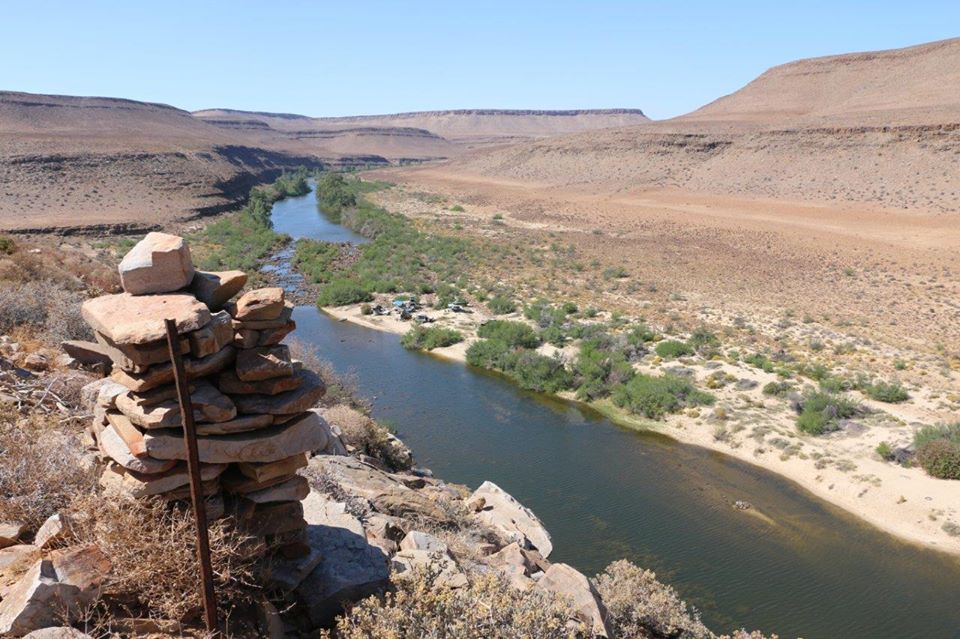 8 vehicles met outside Ceres for breakfast and a chit chat before hitting the road into the Tankwa Karoo. The notorious R355 was in good condition but still cost one puncture for one member. Arriving at the turn off down to the river meant going into low range and an interesting but not technical drive down to the water’s edge.

Gloves, cutters and crowbars were at hand as we decided on where to cross the river. After moving a few large rocks and many smaller ones, we had a passable crossing through the river bed. Hilton ignored all of this and promptly drove through the almost waist deep riverbed and got stuck in the sand on the other side! The rest of us took the crossing we had made, which turned out easier than expected, but the larger rocks just past the bushes on the far side took longer than expected to negotiate before getting onto the sandbank.

Gilbert & Anthony, concerned about ground clearance on their vehicle, elected to not cross and camped on a very nice little sandbank next to the rapids. Meanwhile, on the opposite bank, we drove over the large sandbank and chose a spot to camp. Looking back, the remainder of the group were getting comprehensively stuck in the sand and pretty much ended up camping where they got stuck! The remainder of the afternoon was spent setting up camp, swimming and settling down for an evening around the fire. (Being a spot not normally visited, there was plenty of dead thorn trees to burn!)

The next 2 days were spent doing some exploring on foot, swimming and lots of fishing. The Bass are like flies in this river! All the while, we were patiently being watched over by the many sentinels up on the cliff! Gilbert & Anthony would come visiting either by walking across the river or by using Dieter’s inflatable boat. Sunday was a really hot day that meant that most of the afternoon was focused on being near the water and swimming. Needless to say we were all looking a bit pink by then.

Monday morning came around too soon and it was time to pack up and leave. Steady work on the thorn trees meant that we were able to access another trail and exit via another 4×4 track. However, getting out of the sand proved to be a challenge and there was much gunning of engines to get enough power down to exit the thick sand, with some hairy passages through the freshly cut thorn trees! (Yes, you, Ken! J) However, I think most preferred going out this way than having to cross the riverbed again.

A very scenic drive out with views over the canyon lead us out onto the plateau before stopping in at a farm to meet the manager as there is opportunity to bush camp on the river on this farm in the future. From there, lunch was had on a sand bank next to the river at Uitspankraal with the wind starting to howl (cold front approaching). Goodbyes were said at the Englishman’s Grave where everyone re-inflated their tires.

All in all, a soul refreshing long weekend in the wilds in good company with not another soul around for many a mile, even though we were outnumbered by stone sentinels!