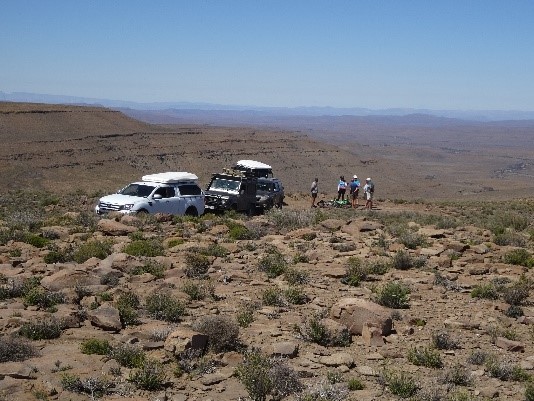 Third time lucky. The Gemsbokfontein outing over Easter was cancelled due to lockdown, rescheduled for the end of August but postponed in favour of a Richtersveld trip once provincial borders opened (a good move judging by the weather then!) and finally moved out by 2 days due to the wild weather we had last week. Interestingly, through all this the same members were wanting to go all of the time!

On Saturday the 3rd of October we set off with Jurie Schuurman & Sanette, Laurence & Mandy Green,  Ivan Napoleon & Anita, Walter Mohr and Rob Hall. Ken & Shona Sturgeon could not make it due to Ken having a back problem and Dave & Anne Roy could not either due to Dave having a shoulder op. Hope both of you are doing OK now!

After meeting in De Doorns, the convoy set out en route to camp. A quick stop at the cemetery on the N1 outside Matjiesfontein was had for those who had not stopped there before. (It’s not the easiest turnoff to find on a busy road!) Back on the road things became more interesting once we hit dirt and the big wind farm going up was an eye opener to all. One appreciates how remote one is on entering the Gemsbokfontein farm. It was a slow final drive to the campsite as it is a 4×4 trail in its own right but the farmer had made it more bouncy by recently driving a bulldozer along the track with the blade bouncing up and down. Laurence and Mandy found it not a good track to travel with the suspension airbags at high pressure! While Saturday was partly cloudy, a windless evening made for a very pleasant evening around the fire.

Sunday was our hiking day and we set off up one of the valleys at our campsite exploring. The valley steadily climbed with waterfalls becoming more frequent and higher the further we went. The rivers were not flowing but one could see that they had run in the recent past.

Monday was the day to do the 4×4 trail up onto the escarpment. Jurie & Sanette elected to cycle the 4×4 trail, leaving camp shortly before us and we met up with them about half way up the trail after a particularly steep climb. The remainder of the climb took us to a view point with the cyclists arriving shortly after.  Darn! They are definitely using something stronger than Jungle Outs! The return trip was slow and steady with the cyclists leaving us in their dust. The steep section raised a few eyebrows as it did not appear as steep on the way up! Jurie took a tumble on the steep section – he had stopped to check back to see how Sanette was doing and promptly went over the front wheel while standing still! That’s how steep the trail is!

Laurence & Mandy had elected for a chillout day in camp but were dealt a blow when a gust of wind blew through camp and lifted their awning and pulling the pegs out bending the bolts where it swivels on the vehicle. Amazingly everyone else’s camp was left completely untouched! Fortunately the bent bolts did not stop the awning closing but would need replacing.

With plenty of wood in the valley we had been treating ourselves to some large fires the previous nights but stock was running low so the “troops” were dispatched to gather more. The farmer had cleared a section of the campsite and a number of bush / trees were left in a small depression. These were collected but a large one fought back leaving Laurence on his bum in the thorns with his legs in the air. A bit of help was required to get him out and he was left with a healthy number of thorn holes in his arm and back! He then dragged the tree to the fire area for execution.

After supper, the bushes / small trees were used to fuel the fire but once Laurence’s tree went on, man, now that was a fire! All Rob could say was Andy!, you’re insatiable! (Too big a word – don’t understand! J)   Disclaimer – Laurence had suffered dearly getting the tree and had dragged it to the fire. All I did was move it the final few metres. So, now, who is the insatiable one? (Either way, everyone enjoyed seeing the entire valley lit up!)

Tuesday morning we left camp and drove down through the very scenic Moordenaars Karoo to Laingsburg where we said goodbye to Rob who needed to get back to town. The remainder of us took back roads enjoying the wild scenery ending with us camping under a bridge on an abandoned railway line.  After exploring a section of the abandoned railway a pleasant evening around the fire in a tight sheltered valley was had with jokes of ghost trains due to come during the night.