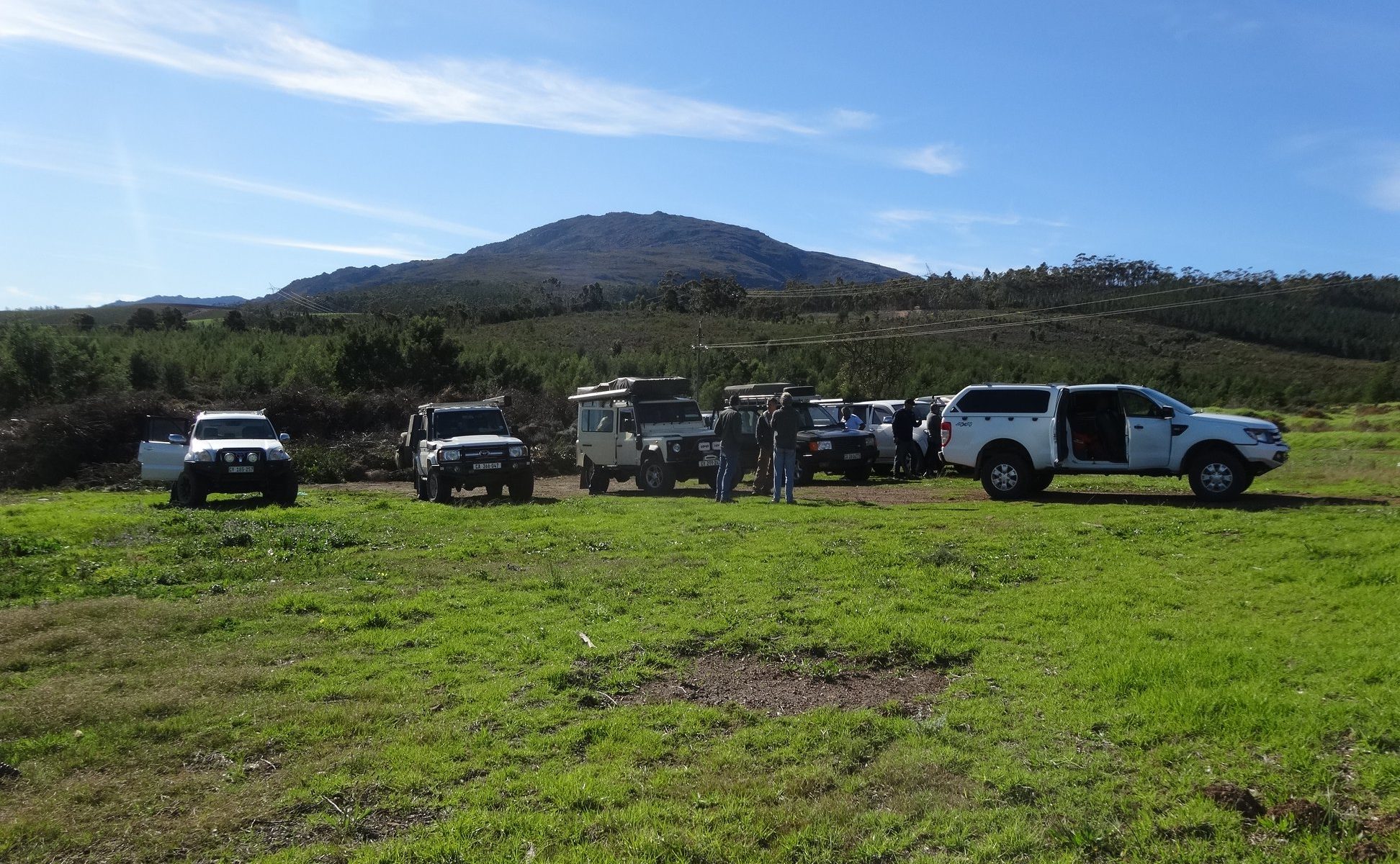 Andy and I left home in Cape Town in light rain en route to meet the other day-trippers and I was wondering whether this was such a good idea after all! However, my vision of staying in a warm bed was soon surpassed by the excitement of getting out and getting our wheels dirty (literally!) after months spent in lockdown!

8 vehicles driven by 7 club members and one potential new member met at the Engen False Bay One Stop on the N2 just before 9am, everyone eagerly greeting and sharing their tales of lockdown. But……….. we appeared to be missing one more vehicle – also a potential new member whom I had invited along to spend the day with us getting a “feel” for the club.  One phone call later and everything was sorted out – our potential newbie, Mel, had misread the instructions and had gone to the Engen One Stop on the N1 instead.  No harm, no foul – new arrangements were quickly made and we proceeded to Sir Lowry’s Pass, where we would meet Mel and his wife, Louise at the viewpoint overlooking Somerset West. We made good time, and had just arrived at the viewpoint on top of Sir Lowry’s Pass, when Mel came roaring into the parking lot – he must have had the pedal to the metal hard to catch up so quickly!

There was a light drizzle falling and the outside temperature was quite chilly so we decided to retreat to the warmth of our vehicles and proceed on our journey.

Luckily, the weather started improving and soon the sun graced us by chasing away the clouds and warming up the temperature. The rest of the day was spent meandering along beautiful dirt tracks where everything looked so green.  We stopped a few times for a “java download” and to let the puppy belonging to Gareth and Katriena, in Dieter’s vehicle, stretch its legs and explore a bit.

It was quite strange that the closer we drove to Saggy Stone, our lunchtime destination, the drier the terrain became and it was almost as if this part of Worcester had not been given the memo that winter = rain!  The day had warmed up considerably, everyone was shedding their warm jackets and we could not believe that we had left Cape Town in wet, cold weather!

Lunch at Saggy Stone was an absolute treat and everyone enjoyed their delicious, generously-portioned meals!  The cherry on the cake would have been a Saggy Stone beer to wash down the excellent meal with but unfortunately, due to current regulations, they are not allowed to serve alcohol to customers on the premises.  This did not detract too much from the happy ambience and there were contented sighs all around after lunch.

Some of us had pre-ordered Saggy Stone beers to enjoy at home and I must say, the Dark Horse Lager is an enjoyable craft beer with undertones of chocolate (not that I am a beer connoisseur by any stretch……. J ).

Most of us said our goodbyes to each other before leaving Saggy Stone, but there were a few vehicles who travelled in convoy back to Cape Town via Du Toitskloof Pass. From the viewpoint on top of Du Toitskloof Pass, the sun was just sinking below the horizon when we bid each other a final goodbye and headed for home.