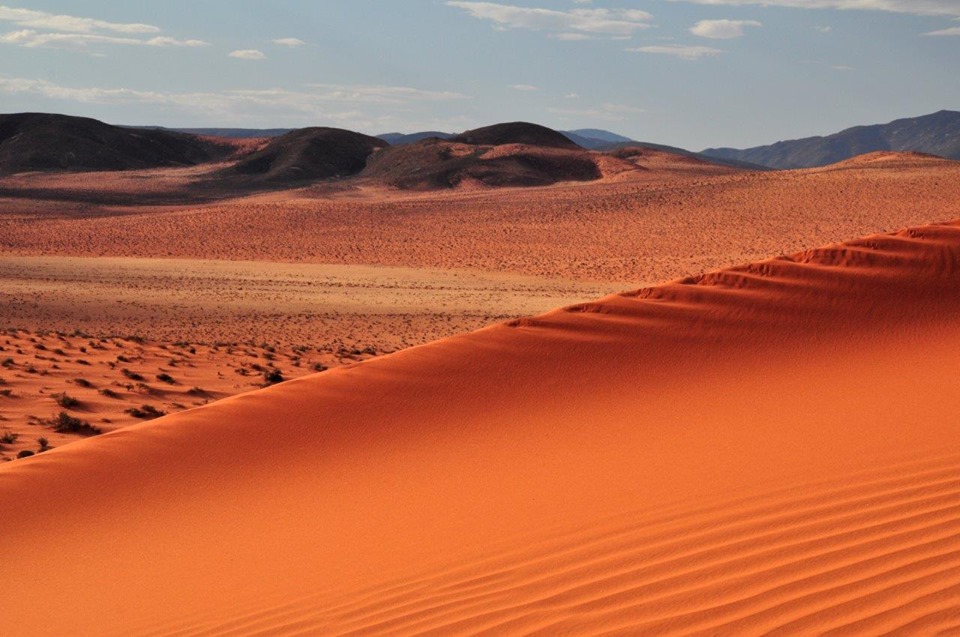 Andy invited club members to join him on a 12 day exploration of the Richtersveld Conservancy and he got four takers – Rob Hall, Ivan Napoleon, Ronel and Trevor Huber and Ken and Shona Sturgeon.

We met up at Roodebergskloof Camp near Garies, a camp being developed on the site of old farm buildings, with long drop loos but no water as the pipes had been vandalised. Fortunately not a problem as we were equipped for bush camping.

Having joined the N7 next morning, instead of rushing past, we stopped at an abandoned village where there is an amazing ruin of a large stone and brick church.

After some last minute shopping at Springbok, we explored Nababeep’s defunct copper mine and a few non-working granite quarries. Skaapsrivier Canyon is a spectacular canyon well worth visiting and further on is the remains of another fairly large copper mine.

One of the highlights of the trip was Nigramoep Slow Living Guest Farm, a little known treasure discovered by Andy. It is a farm with self catering cottages run by the most welcoming people you could wish to meet, Suzette and Marius. They said the place was ours including outdoor and indoor  lounges and an honesty bar. Although it was Easter, we were the only guests and Andy had taken them up on their offer of a traditional lamb potjie supper. This was really special, including delicious baked veggies and rice, home baked bread and jam followed by malva pudding with custard and coffee. All for R120 per person! A must-do if you are in the area.

Having filled up with water and fuel in Steinkopf it was off to the Richtersveld. Our first stop was a well being used by the locals and a water tank that used to supply water for the narrow gauge steam train that took copper from Okiep and Nababeep to Port Nolloth. (The locomotive can be seen in Nababeep).

Following some winding tracks known to Andy, we explored an old mica mine that had not been used for years. We could not drive to the mine as all that was left of the last part of the road was a pile of large boulders. We camped on the floor slabs of what had been some prefab buildings.

A fascinating route through Ice Cream Valley (so named because of the white and pink material “flowing” down the mountain sides) took us to a magnificent lookout point overlooking a mini Grand Canyon.

That night we camped where a rock formation had formed what looked like a man made wall. It was in fact the separation of two river valleys and perhaps in a few million years the wall will be eroded away and one river will be “captured” by the other.

The eastern part of the conservancy consisted of steep barren mountains with magnificent rock formations. Relaxing after the heat of the day we camped that night in a fairly open valley. Our concerns regarding adequate wood were unfounded as Ivan kept producing wood – where he stored it was a mystery.

At Eksteensfontein we paid for three days in the Conservancy and tanked up with water. Heading north towards the Orange, Andy found a lovely camp site in a river bed overlooked by a high cliff.

The drive down to the Orange in a dry river bed was interesting to say the least with towering cliffs on either side. There were several places that required guidance. Some beautiful twisted rock formations made this a memorable experience before the wonderful sight of the Orange opened out in front of us. Although three nights on the Orange River at Pinnacle Point were planned, it was so perfect that we decided to spend a fourth night there. The only other people we saw were two pairs of canoeists and their guides. The weather was wonderful with balmy nights and no wind. There were hikes up the mountains, walks along the river, lots of swimming, large fires at night, good company and a wide range of meals being prepared.

Then finally time to leave this idyllic spot and head back to Eksteensfontein for a water top up and to pay for an extra night’s camping. As the office was closed and water taps dry, we approached a family nearby who were watering their garden and asked if we could buy some water. They insisted that water was free and we were welcome to help ourselves. We thanked them with two cans of beer and they were very pleased with the deal! North of Eksteensfontein where the landscape is wide open, Andy found yet another great campsite in a red sandy valley covered with low bush. On our last day we went in search of unusual sandstone caves formed, we suspect, mainly by wind erosion. A rough road took us to a spring which had a trickle of clear
water into some small pools. A barely visible route made up of sharp bumpy rocks led us into a really narrow valley where we had to negotiate a track with very steep side angles. Once out the other side we entered a wide red sandy valley for our final night in a really spectacular setting.

We had a last companiable braai using up the carefully husbanded braai wood we had brought. A big thank you to Ivan who produced the last of his huge wood supply!

We went to bed with a light breeze and awoke to a chilly wind and a massive blanket of coastal fog. We travelled across a wide landscape quite different to the harsh rocky mountains we had experienced on the rest of the trip to meet the Port Nolloth road to Steinkopf. In misty light rain we inflated tyres and said our goodbyes to a really special trip with good travelling companions and a really well planned trip, thanks to Andy.

Andy noted that we had travelled 400kms from Steinkopf in 11 days at an average speed of 16 kms per hour, much of it in low range low gear. Fuel consumption was pretty high needless to say but well worth it. 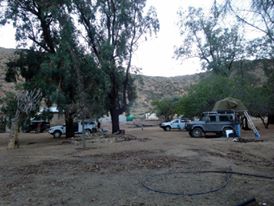